High Altitude Rhubarb produces and sells both rhubarb seeds and rhubarb plants as well as horseradish plants.  This page will discuss each of those products.  It will describe the general situation and offer information specific to this farm. 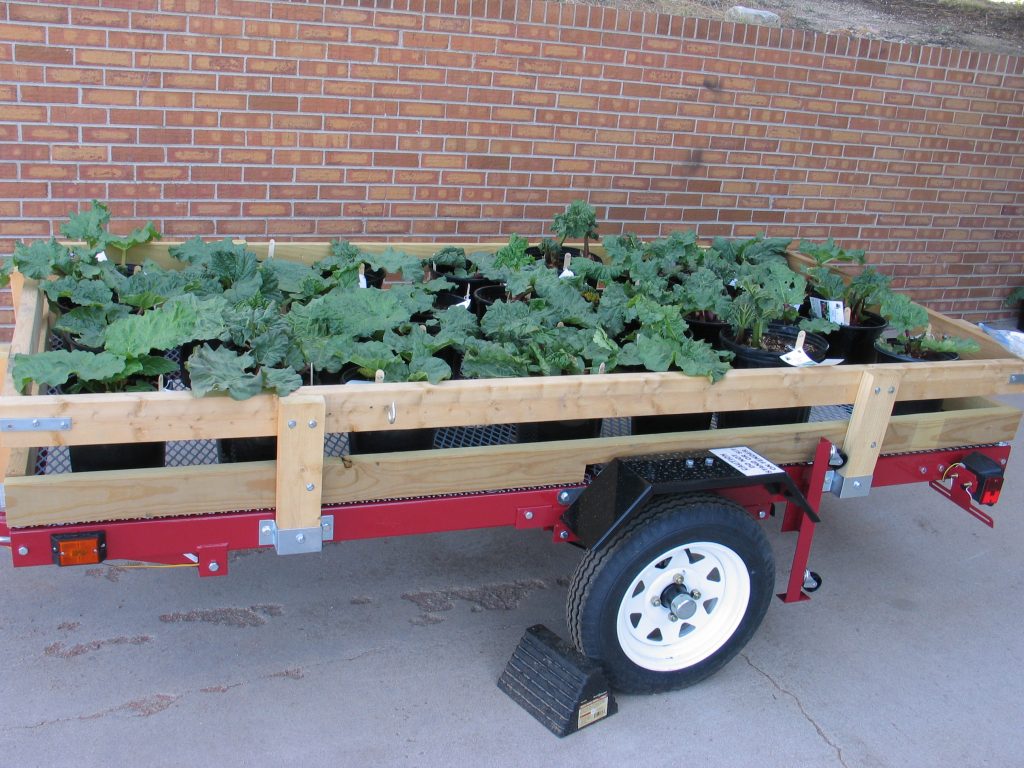 On a large scale or where transportation is a problem, such as across most international borders, plants are propagated by either seeds or tissue culture (i.e. cloned).  Rhubarb easily hybridizes through normal sexual reproduction.  Indeed, it is tetraploid, meaning the cells have more groups of genes than just one from mom and one from dad, which results in more than  normal variation in the offspring of the same plants.  Additionally, sexual reproduction (seeds) is influenced by regression toward the mean, a phenomenon wherein new generations tend to differ from their parents by moving toward the average in each characteristic rather than toward one extreme of the other.  For example, phenomenally large plants tend to produce seeds for smaller plants.  The first generation of our Victoria seeds produced about 1/3 true-to-type, large plants like their parents, and about 1/5 duds, small plants bent on producing too many seed stalks.  We are now experimenting with the second generation plants. 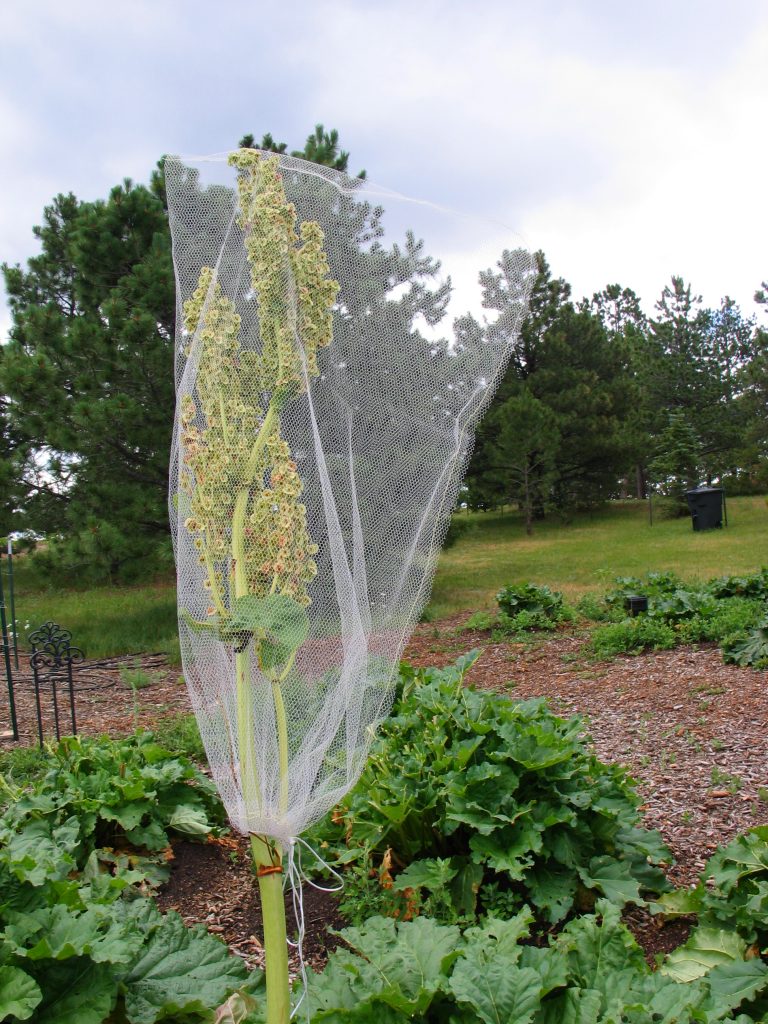 Almost all rhubarb seeds on the market are first generation, F1, seeds.  In our experience about 1/3 the new seedlings will be true to type.  The other 2/3 will have some important characteristic different from the parents.   The second generation of Victoria seeds, F2, were harvested here in 2017.   These will be planted in 2018 with a goal toward the third generation, F3, and hopefully a generation of these magnificent plants that will breed true to type.   It will be a few years before the F3 seeds are available.

High Altitude Rhubarb pioneered a unique way of harvesting rhubarb seeds.  Conventional wisdom says to harvest seeds either when 2/3 of them are mature of when they are all mature.  Either way, you forfeit 1/3 of the seeds.  If you wait until they have all matured then 1/3 will already have fallen to the ground or, if not protected, 100% will have been eaten by birds!  We wrap the immature seed head in a bag made of bridal veil material, see photo.  This methods allows us to wait until all seeds are mature and captures 100% of the viable seeds.  It is a bag shut with a pull-tie around the stalk.  The tie is sewn into a channel around the bottom of the bag, becoming a draw string. 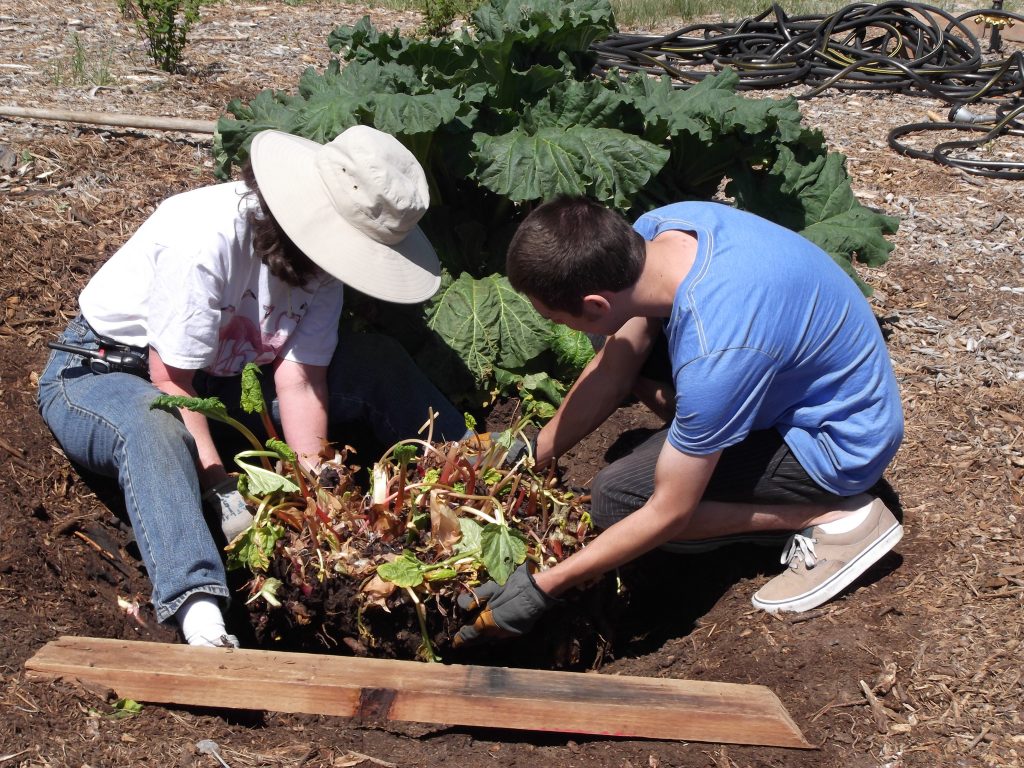 On small scales rhubarb is best propagated via root-stock.  The roots of a 2-3-year-old plant form into a clump, each root looking something like a sweet potato.  The roots must be pulled or cut apart.  One 3 year old victoria plant will produce about 15 new plants from roots.  To improve success rates it is desirable to have a leave crown (beginning of a new petiole) on each newly separated root.  Therefore, this is also known as propagation via crowns.

Rhubarb has proven to be problematic to clone, i.e. to propagate through tissue culture.   Two labs worked for 5 years before one finally succeeded.  This is, however, the most efficient way to produce large quantities of identical plants, plants true-to-type with their parents.  Our Colorado Red should be available through various seed catalogues by 2020, though it will sell under a different cultivar name. 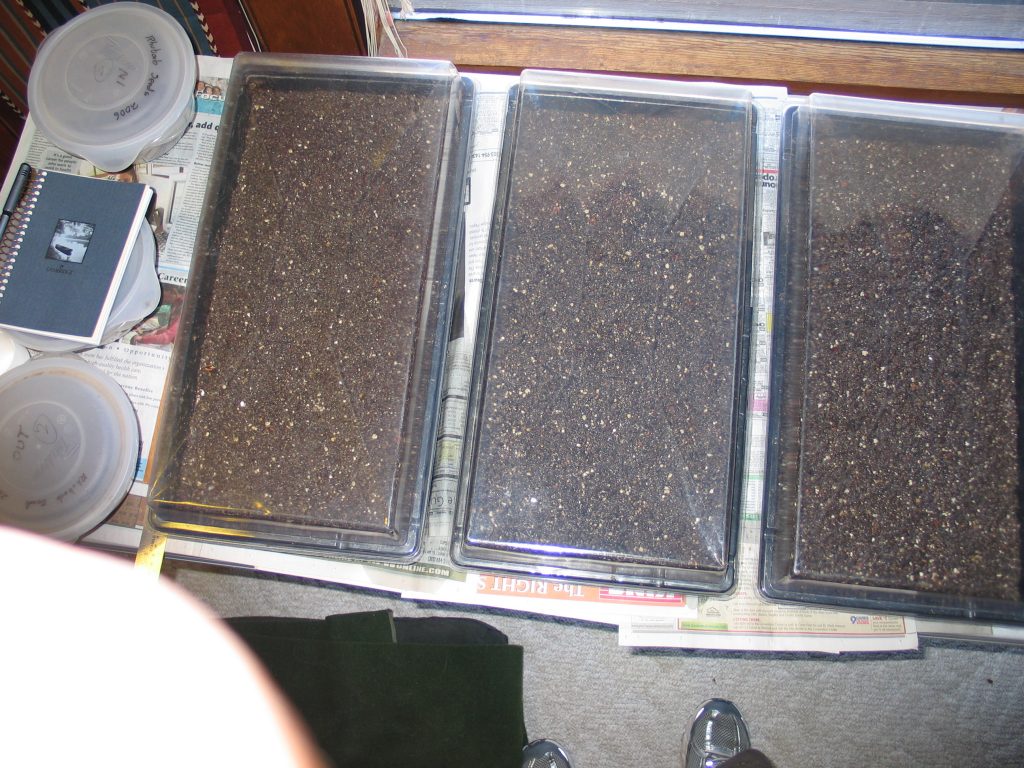 rhubarb seed flats, each will produce about 50 seedlings

The farm is always experimenting with new varieties of rhubarb and new growing/irrigation ideas.  Many are a bust but even that tells us something.   They sell Victoria, Turkish, Canada Red and Ornamental rhubarb plants on a regular basis.   Future years should include Colorado Red and some promising new Australian varieties.

Plants are grown for sale in two different ways.  The first method:  The plants are started indoors in March, moved into six-packs, hardened to the sun and planted in late June.  They are then dug and placed into 2 gallon pots for sale the following spring.  It takes 2 weeks in the final pot to ensure the plants are stable and growing.   The second method:  The same seedlings started indoors in March are not put into the ground in June.  Instead, they are moved from the seedling beds into 2 gallon pots.  These pots are hardened to the sun and placed in the field in a pot-in-pot system.  The outer pot, which remains in the ground, is buried in mulch.  The inner pot contains a mix of potting soil, compost and perlite and houses the rhubarb plant.  This later technique is much more time-efficient but the potted plants require additional fertilizers in the spring and more frequent watering than the seedlings in the ground, i.e. planted by the first method. 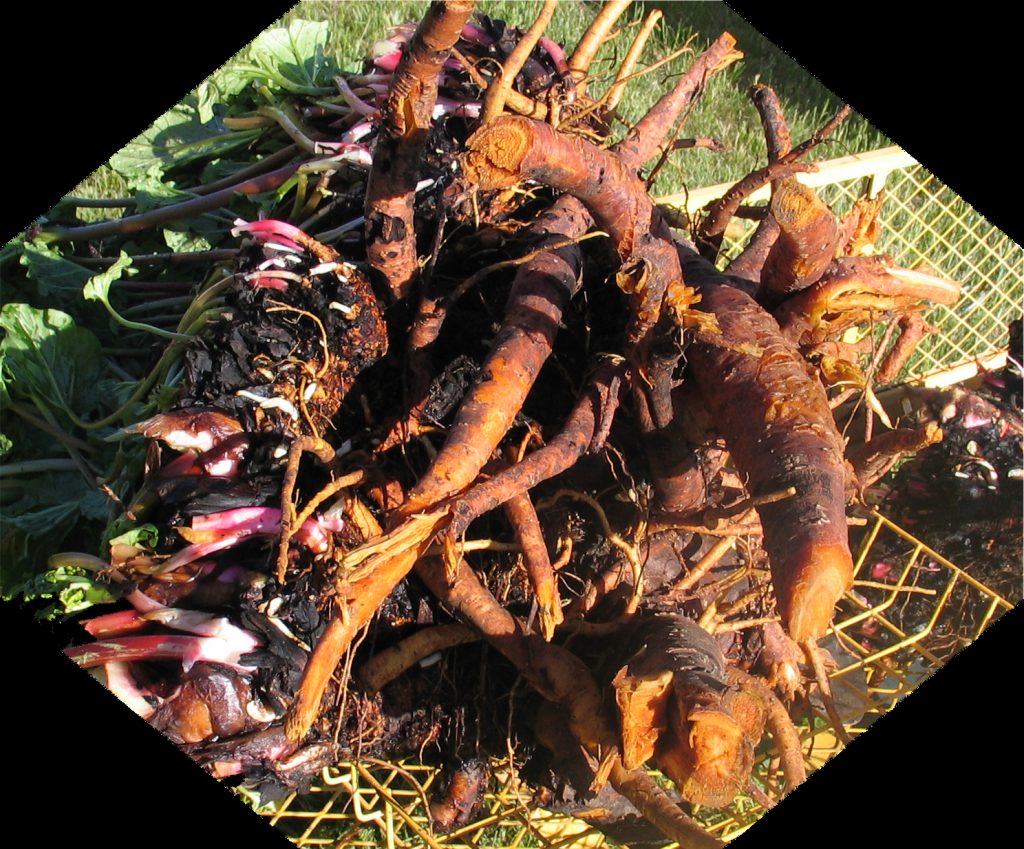 In the early years of the farm the owners would dig up mature plants and split/sell the roots.  Demand for plants, however, soon made it clear this was dis-economical…and a LOT of work.

Hours We open only during the public harvest and by appointment and pre-arranged times to pick up plants.
The harvest is normally one weekend in early June.  Free admission.  Plant sales are conducted via email.
Contact us via email to join the email announcement lists to be up-do-date on each year's harvest plans or plant sales.