This page is devoted to photos and descriptions of the primary varieties of fresh rhubarb available at our farm.  Current photos and descriptions are of five types:  Victoria,  Colorado Red, Turkish, Canada Red and Ornamental rhubarb.  Those varieties account for the majority of our fresh rhubarb production as of 2018.   Victoria, Turkish, Canada Red and Ornamental are the only varieties of plants we sell as of 2018.  We expect to begin sales of Colorado Red plants in 2019.  Our other varieties include Crimson Red, Wandin Giant, Valentine, Red and numerous experimental varieties from Australia, Alaska and parts unknown.  Most of those represent failed experiments or successful varieties yet to be propagated in large numbers.  “Heritage” and “heirloom” will be used interchangeably to mean non-gmo plants that can be traced back at least 50 years.

First a note about the identification and naming of rhubarb varieties.   Identifying rhubarb cultivars is at best problematic and almost always unreliable.  Most rhubarb growers name their plants either from the general characteristics they demonstrate or for the market appeal of the name.   Few if any growers can trace the origin of the genetic material with any certitude.  This is for several good reasons.  Firstly, there are 60-100 known varieties of rhubarb and there are no existing keys to help identify varieties.  This is complicated by the fact that some sellers offer plants and roots germinated from seed, often without telling their customers.  Such plants normally represent a new, hybrid variety and may not have much resemblance to their parent plants.  Making it even worse is the fact that individual varieties change characteristics both during phases of annual growth and as they age over the years.  It is very difficult to identify any variety with any confidence.  We all do our best.  However, you’re best advised to rely on the description of the varieties characteristics than on the name associated with it.

Second, a note about the characteristics associated with different varieties:  It is generally accepted that the nutritional value of rhubarb does not vary significantly between varieties.  The important differences are tartness (acidity), texture, flavor and color.  Individual plants change their tartness, texture and flavor as the plants age and even throughout the annual growing cycle.  They tend to grow more acidic and fibrous as the stalks age each year.  Organically grown plants can remain productive for 20-25 years in the same location provided adequate nutrients are added to the soil annually.  Ignored, however, rhubarb will quickly deplete the soil.   Most varieties are quite robust and can tolerate a wide variety of conditions.  They simply become small and unproductive in poor conditions.  They can grow in deep, forest shade or in full, intense sunlight.  In general, the more light and the better suited the soil the larger, better tasting and longer lived the plant.

An heirloom variety of green rhubarb.   Prior to WWII this was the most common type of rhubarb in the US.  Green on the inside, grading from red to green on the outside from the stalk to the leaf.  The stalks are smooth on the outside and the skin is thin.  They can be frozen and cooked without peeling.Stalks are relatively long (2+ feet) and normally about 1 inch in diameter but can be as thick as 2 inches in diameter.  An early harvest variety normally peaking 2 to 3 weeks before red varieties.  This variety is one of the best suited to our own growing conditions.   The plants become enormous with an annual yield of up to 90 pounds of quality rhubarb apiece on 100-150 gallons of supplemental water in a semi-arid climate.  The variety is medium tart with an excellent rhubarb flavor.  Most of our own dishes are made from this variety.

These photos are of Victoria.  In our field the plants achieve heights in excess of four feet and widths of 8 feet even though their root systems is limited to a diameter of 1-2 feet.

A rare, pure red variety proprietary to High Altitude Rhubarb.  First plant found growing apparently wild in our forest when we bought the house in 1991.  Stalks are the length of typical celery stalks, about 12 inches, and about 3/4 inch in diameter.  Most are deep red outside and inside.  This variety peaks 2-3 weeks later than the Victoria plants.  It is also more tart than Victoria with a tougher skin.  The stalks contribute an outstanding red color to any dish or juice.  We sometimes include one or two of these for each 10 Victoria stalks when cooking.  That is sufficient to impart a medium red color to the final mix.  As of 2018 we are in the process of patenting this variety and, once complete, will be able to sell them at the farm.

A late-harvest, green variety.  Green on the inside and out with a small area of red at the base.  This is a mild form of rhubarb with a slight citrus undertone.   Dishes cooked with Turkish require less sweetener than most other varieties.  In our fields it peaks about a month later than Victoria and remains viable a month or so longer, weather permitting.  The stalks vary greatly in length from 8 to 18 inches and most are thinner than Victoria, about 1/2 inch in diameter.  Stalks quickly become hollow if not harvested at their peak.  The outer surface is rough, like a soft sand paper.  They are best peeled before cooking or freezing.

Canada Red rhubarb is large for a red variety.  Stalks can be up to 20″ in length.  Plants are typically 2′ tall or less and spread to 3′-4′ in diameter.  Although hardy it is a red variety and such varieties are typically smaller, less robust and more prone to diseases and problems than green varieties.  It matures at the same time as Victoria and a few weeks before Turkish each year.  Stalks are thicker, more fibrous and woody compared to Victoria or Turkish.  They are solid red outside and red to green inside.  Red varieties are preferred by some for culinary dishes requiring a red color.  Canada Red tens to be larger than Colorado Red.  Canada Red is also less intensely red but decidedly redder than Victoria or any green variety.

An attractive, mid-sized green variety that is better suited to the role of a flowering plant than a food source.  This variety grows to about two feet high, produces a large number of flower stalks and exhibits unusually attractive leaves.  The leaves are 6-10 inches long and have crinkled edges.  Ornamental rhubarb bolts (i.e. puts up flower stalks) almost before it produces leaves!  The food stalks are relatively few and small though they are edible and have a character similar to Turkish in texture and flavor.  The annual production of each plant is very small…a pie at most.  The specimen in the photos is about 4′ tall when in full bloom.  (Maximum height varies from plant to plant, some are only 2 feet tall in full bloom).  The first photo on the left is the plant in full bloom.  The next one on the right and the next one on the left are of the plant as the flower heads were just emerging.  The last one is a closeup of a leaf.

Here is a series of photos of an Ornamental rhubarb before the flower heads have bloomed: 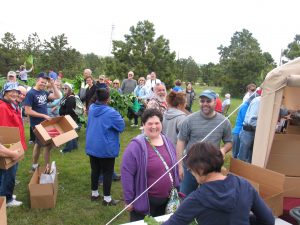 Visit us for the Harvest Festival or by appointment.